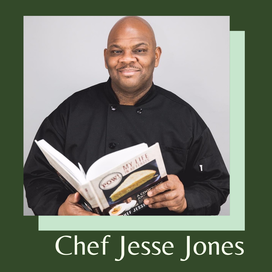 Chef Jesse Jones from Newark, New Jersey is now a private chef and guest speaker around the state. He knew his destiny was to be a chef from the early stages of his life. In his childhood home, he was raised with love and resilience embedded in words, actions and most importantly food. Surrounded by generous and tenacious women such as his Mother, Grandmother and Aunts he learned to show love through culinary arts and giving back to his community. Despite struggling and not always having everything they wanted, they never let their struggles overcome them or their desire to be the reason someone else smiles. Chef Jesse said, “I never understood as a kid how when we were struggling, we were always giving back. Now that I'm older, I understand.”

Embodying the special women in his life, Chef Jesse is a familiar face in his community and across the state of New Jersey. He loves to donate his time to inspire and teach the future of our industry. Not only does he strive to be a mentor for students in the kitchen, but he makes it a priority to be there for the students if they just need someone to talk to. This year, and for seven years previously, he has been a culinary judge in the NJ ProStart Invitational Competition.

The NJRHA is lucky to have someone that undoubtedly never turns down the opportunity to work with the ProStart students to brighten, inspire, and excite the future of our industry. His dedication to the students and the respect they have for him only affirms his influence in the New Jersey restaurant and hospitality industry. 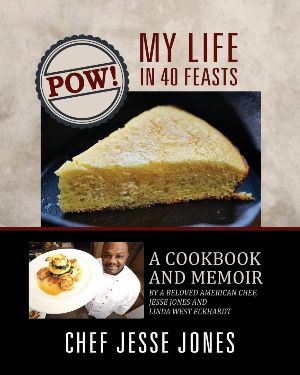 Chef Jesse Jones previously started his own catering company, Chef Jesse Concepts, published his own cookbook, POW! My Life in 40 Feasts, owned Heart & Soul Restaurant, has been awarded the title of Ultimate Chef of Bergen County in 2010, and is a current private chef. There were times Chef Jesse felt lost, doing the same thing over and over, asking what his next step was, but he persisted and was patient, ready for the next opportunity knowing that you can’t chase or reach for it. When the time comes, be ready. Chef Jesse exclaimed, “This is my opportunity to share my story. I worked hard, I worked like a dog. Being a Black chef, I was already judged before my work. I always wondered why I had to be called a Black chef, why couldn’t I just be called a chef? My degrees didn’t matter, I had to work 4 times harder. I had to be aggressive through my food- the level of experience, time, labor, and love. You can taste that.”

His modern approach to southern cooking with a French technique, is crafted from his upbringing and journey in the culinary field. “I always say, I didn’t go looking for French, French found me,” Chef Jesse stated when discussing the chef that first mentored him in the French Restaurant, Dennis Foy’s Townsquare, in Chatham NJ. Chef Jesse always asks himself, “What would my mom, grandma, or aunts have done with these ingredients if they had them? How would they do the dish?” His cookbook, POW! My life in 40 Feasts, recipes rich in history and love, tell his story, and symbolize his POW!

“My advice to students is to work with passion, to work hard and chase your dreams, big or small, your opportunity is coming, and you are going to be ready. Follow your POW!”